Nordson series160AA Quick Spray disposable plastic static mixer nozzles are used for low-pressure air-assisted spraying of two-component coatings. This disposable static mixer is designed for use with conventional meter/mix equipment or with Nordson ’s two-component cartridge system. The reactive coating is mixed within the disposable static mixer. At the mixer outlet, air is introduced which atomizes the liquid stream. The degree of atomization can be adjusted by regulating the airflow rate. Since the reactive coating is contained completely within the mixer, cleanup is minimal. This was originally a TAH product - Nordson acquired TAH several years ago. 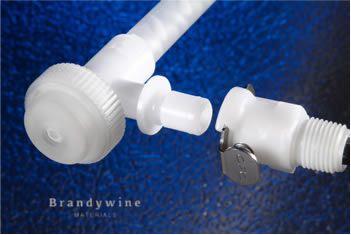